Korean Musical Drama: P’ansori and the Making of Tradition in Modernity 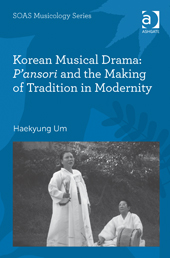 Korean Musical Drama: P’ansori and the Making of Tradition in Modernity

P’ansori is a Korean musical drama for solo voice accompanied by drum. Typically performed with minimal stage setting and props, the soloist narrates and sings epic tales in an archaic dialect with light percussive support. This performance art began as a folk tradition in southwestern Korea, benefited from upper-class patronage in the late-nineteenth century and is now regarded as central to Korean ethnicity in Korea and the Korean diaspora. Since its elevation as a national intangible cultural property in 1964 and subsequent international recognition via UNESCO, p’ansori has become arguably “the most studied single genre in Korean studies” (4). Nevertheless, Haekyung Um’s monograph represents the first thorough account of this musical storytelling genre for English readers. Though heavy on terminology, as might be expected for such a deceptively complex literary and musical tradition, Um’s writing is accessible to non-Korean readers. The inclusion of a glossary in the appendix is helpful, and a discography, filmography and list of compositions provide further references for teaching and research. The theoretical framework is unobtrusive while it also helps the reader to make associations between p’ansori and other musical traditions around the world. This welcome cultural translation of an important Korean musical tradition complements two recent books on the related traditions of ch’anggŭk (Killick 2010) and kayagŭm sanjo (Howard, Lee and Casswell 2008).

The book comprises eight chapters in total. Chapter 1 introduces p’ansori with a thick description of a typical performance and an explanation of its wider cultural and social significance. We begin in the lobby of the concert hall, where fans and friends of the singer have given flowers in support, and gradually move to our seats as Um provides a comprehensive account of musicking practices associated with contemporary p’ansori. In chapter 2, Um draws on a wealth of scholarship to outline the historical and theoretical development of p’ansori, but it is the central descriptive chapters (3-5) that comprise the most detailed musicological and textual analysis of the genre. These chapters, “Text and Music,” “Schools and Styles” and “Individual Styles” respectively, are largely based on Um’s PhD fieldwork in the late 1980s. Her experience as a performer of p’ansori is particularly evident in the descriptions of vocal technique (76-8), where exceptional detail is provided on the techniques (straight voice, fine voice, teeth voice, back of the neck voice, and many more) and styles of ornamentation (snatching voice, cutting voice, rainbow voice, black-eared-kite voice, for example). Ch’unhyangga (The Song of Ch’unhyang), one of the five main pieces of p’ansori, is consistently used as an example to aid comparison between versions in these chapters. Although these chapters are based on fieldwork undertaken almost three decades ago, her rich ethnographic account maintains relevance for p’ansori today. Um presents a balanced approach to the tradition that arguably may not have been as objective immediately following her early fieldwork.

The remainder of the writing is based on more recent research. Chapter 6 examines the changing aesthetics of p’ansori in relation to historical context, ideology, class and gender up to the present day. The rejection and censorship of songs as the genre transitioned from lower class “vulgar” folk song through the middle classes to the upper echelons of society in the early twentieth century explains how a comprehensive repertoire of songs was whittled down to five main pieces by the middle of the century. Chapter 7 is based on fieldwork among the Korean diaspora in China and the former Soviet Union. In comparing two socialist contexts, subtle differences are brought to light, which might otherwise be disregarded when comparing socialist and capitalist nation-states (e.g. the Korean diaspora in the United States). The rejection of the “husky” vocal timbre by second generation Chinese-Korean singers (174), a fundamental trait of p’ansori in Korea, provides an interesting example of the changes in style and technique in diaspora. Chapter 8 explores the recent diffusion of styles with a focus on new patriotic, religious and socio-political p’ansori and the impact of digital and communication technology in the twenty-first century highlights a wealth of areas for further research.

While this book represents an important addition to the ethnomusicological cannon on Korean music, readers of this journal might also find it useful as a comprehensive account of a national musical tradition. Um balances an historical overview of p’ansori with detailed musical analyses that could only result from her extensive experience as a participant-observer. Initially coming from the perspective of a cultural insider, Um explains how her ethnographic research and polite interrogation of practitioners reframed her own approach to and position in the tradition. The latter half of the book situates this musical culture in contemporary Korean society, where approximately one hundred people now receive a BA in p’ansori each year (197). Scholars of other established musical traditions might benefit from her explanation of the blending of schools and styles where, “notions of locality and genealogy merged into a symbolic, musical concept that underline[s] the practice and aesthetic of p’ansori” (103). In contemporary performance, “combination styles are now recognized as part of p’ansori tradition” (105). Finally, the musicological analysis in chapters 3-5 will appeal to composers seeking to borrow from p’ansori and Korean traditional music in general. This book would be a valuable additional to the personal libraries of scholars of Asian music, and individual chapters could be assigned for reading in broader ethnomusicology survey courses. In summary, this is a thoughtful and carefully crafted monograph that will be viewed as the essential English-language reference work on p’ansori for many years to come.