Book Review – Icelandic Men and Me: Sagas of Singing, Self and Everyday Life 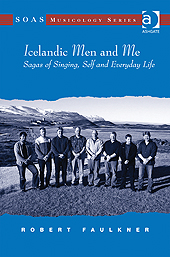 Icelandic Men and Me: Sagas of Singing, Self and Everyday Life

This publication focuses on the role of singing in the community, with a strong focus on the male population. It is inspired by the author’s twenty-year stay in rural North-Eastern Iceland, where he taught music and directed a male choir. Though coming from the discipline of music/ethnomusicology, Richard Faulkner applies a more complex music-based anthropology framework to this monograph, spiced with dashes of sociology and psychology.

The study of recent music practice of the ‘ordinary man’ in a relatively developed western society is not a very common one for musicologists (and certainly not in Iceland) and the author says the subject fell on him by “happenstance” when he moved from urban London to a relatively remote rural area in Iceland and started to conduct a male choir. In the absence of other studies on this matter, the author interviewed a number of local people, as well as working from his own experience as a choir conductor in the area over two decades. As a comparison, as well as perhaps explaining his own positioning, he devotes a chapter in the book to his own life and his personal journey to becoming a musician. The author provides considerable detail on the role of singing in rural Icelandic society, tracing it through generations and gender, personal and communal practice. He tracks singing practice from cradle to death; from lullabies for children though to singing at funerals; singing at work; singing for pleasure; its use as an emotional outlet (or restraint); singing as a manifestation of self; singing as a confirmation of one’s role in society; and last, but not least, singing as a manifestation of one’s manhood.

This gender issue is, in many ways, at the core of Faulkner’s subject and the explanations that male singers offer on the advantages of male choirs over women’s choirs are interesting and illustrative. Another important aspect of the singing tradition is in its manifestation of national identity, the embodying act of identification with a society. Not surprisingly, the author largely connects this movement to the nineteenth-century reconstruction of national identity, which was common to many European nations and nations-to-be. Faulkner does however also consider some particularly local characteristics which pertain to Iceland, including cultural relations to ‘nature’ and the unusual context of the country’s national independence. Iceland only gained independence from Denmark after the Second World War (and its effective occupation by the USA and UK). The popularity of male choirs in Iceland has been remarkable, perhaps even to Icelanders themselves, and an investigation into what makes these choirs such an integral part of society across Iceland is long overdue. Faulkner’s study inevitably raises other questions too, for example, why are there not nearly as many mixed-voice choirs, and why are there so few women’s’ choirs?

Informative as the book is, the conclusions are, as the author says, “dialectical, not definitive” (190). He does confidently state that there is a high rate of communal singing going on and it remains an important factor of everyday life. As this research took place in rural North-Eastern Iceland (and this reviewer coming from the urban South-Western of the country), the amount and importance of singing to the subjects cannot be questioned. However, because of his line of work, the author has undoubtedly spent more time with the music-lovers part of his area than others might. The sample size and relative population proportion of choir singers is not indicated. At the conclusion the author wisely writes that he wants to “urge caution in over-homogenising” the population of the country (190). The reviewer can only say from his personal experience with three other parts of the country (and perhaps slightly different times, both earlier and later) that his caution is justified. The reviewer’s experience of his own life and his parents’ life are all quite different from what is described in the book (and this is probably worthy of another research project), but all stem from parts of the country that somehow evaded choir singing. Even for such a small country with very homogenous population with harsh natural boundaries and a bad (or non-existent) road system and a general lack of communication has caused a larger-than-expected diversity between parts of the country. A very fast assimilation of modern society took place in the twentieth century and made the gap between generations incredibly big at times. This means that even a little difference in place or time can become a bigger-than-expected difference in cultural practice. The author’s findings for his part of the country and his times are certainly not to be doubted.

Having said this, male Icelanders’ appetite for singing in male choirs is widely known, if not notorious, and has been so since the 19th century and up to present times. It should thus be safe to assume the research would apply to a significant portion of the nation.
What little has already been written on the subject supports the author’s research on musical practise in North-Eastern Iceland. He has done an excellent job of documenting and analysing amateur musical life in a way that has probably not been done before, combining methods from several different academic disciplines. There are some spelling problems with Icelandic names, indicating lack of proof-reading by an Icelander, but apart from that, this is a job very well done.

This reviewer has, like Faulkner himself, not found any other research on comparable subjects. What is available, apart from local word of mouth, is mainly secondary sources such as memoirs of local people, and though obviously non-academic in nature, these accounts are numerous and accessible. The National Museum of Iceland has also been collecting stories from common people from the 1960s and onwards, which might contain some information, probably little bits here and there. This is basically a lot of data that might contain information on the subject, but to date nobody has gone through this colection to make it available. This leaves Faulkner’s book as the only significant research on the subject, and can as such be highly recommended as, so far, the only real research in this particular field, and, by its own merit, a very good study in and by itself.

Rikhardur H. Fridriksson
Tónlistardeild / Department of Music at the Icelandic Academy of the Arts, Reykjavik