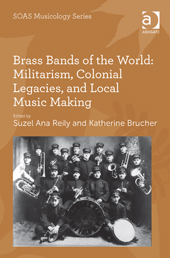 In the joyful and unapologetically biased forward to this volume, Charles Keil sets forth with an inscription (I presume of his own devising): “Yes to the Dionysian blown and beaten! Outdoors. In public. In nature. Wild. Happy to be ignoring the Apollonian strung and sung. Indoors. Domesticated” (xiii). For Keil, brass bands, with their focus on practice, community, and the local, constitute much more than an interesting subject of study for ethnomusicologists. Rather, they contain within them the seeds by which the increasingly alienated conditions of modern life might be repaired. Whether or not one agrees with this evaluation of contemporary society (and the concomitant dismissal of technology, amplification, and guitars!), Keil vividly conveys something of what is unique to brass band traditions worldwide. These bands provide contexts that privilege participation, a convergence of knowledge and feeling, and it is through this participatory mode that identities, communities, and publics are stimulated and felt.

The introduction to the volume by Suzel Reily and Katherine Brucher highlights these issues by outlining a number of conceptual threads that work across many of the individual chapters. Relying on de Certeau’s differentiation between static notions of place and the transformative production of space through use, they suggest that “bands transform both places into spaces and spaces into places, continuously actualising spaces during their performances and identifying places through their presence” (18). This framework is significant because it locates bands at the very heart of place- and space-making activities. This perspective feeds into their discussion of community, which is equally nuanced. Arguing that communities are produced and practiced through the musical work of banding, they suggest that these processes are particularly important among marginalised peoples. In other words, the diversity of global brass band traditions that have survived beyond the colonial encounters that spawned them survive precisely because they have provided particularly powerful articulations and experiences of community, often in the very places where these communities have been overlooked.

Brass Bands of the World does not attempt comprehensive coverage of global band traditions, nor should it. Instead, the volume contains case studies from Britain, Japan, Korea, Brazil, New Orleans, South Africa, Portugal, Northern Ireland, and Mexico, each one approached differently, in chapters that range from historical gap-filling to substantial re-evaluations of the very nature of banding and band music. The contributors to the book are largely ethnomusicologists, and the collection benefits from rich ethnographic description and reliance on insider perspectives, which make it a useful tool for teaching. Rather than providing subsections based on theoretical concerns or geographical areas, the editors chose a looser form of organisation, following “a logic that moves from Europe and the development of the military ban prototype to colonial expansion to processes of localization” (27). This organisational structure works, for the most part, and puts the onus on the reader to realise how the various conceptual threads presented here flow. In addition to the articulated concepts, a number of other important themes emerge, which warrant attention.

A strong theme is the seeming paradox of the brass band as an institutionalised realm of musical production based upon constancy, versus the adaptability of the genre that has made it such a viable medium across such diverse cultures. This tension between tradition and change is especially highlighted in the chapters that comprise roughly the first half of the book. It is first outlined in Trevor Herbert’s consideration of British brass bands, through his idea of the ‘performance domain’ – the durability of the tradition’s contexts and sounds – which so clearly defines the tradition in Britain. He makes an argument concerning this idea which resonates with many of the studies presented in this volume when he says that “[t]his constancy should not be confused with stagnation, because, somewhat paradoxically, banding as a whole can be characterised by its vitality and subscription to modern life at the expense of retrospection…” (34). The next two chapters highlight similar processes at work in East Asian contexts. Sarah McClimon’s examination of Japanese brass bands from the mid-nineteenth to the mid-twentieth century highlights the ways in which the repertory and style changed according to varying degrees of militarisation. Heejin Kim explores the diversity of genres used by brass bands in South Korean military contexts, arguing that even borrowed musics (American popular music, non-Korean marches) could be employed in the project of nationalism.

Suzel Reily focuses on the idea of adaptability in her thoughtful analysis of the bandas de música tradition of Brazil. She too thinks through the paradox presented by Herbert as she looks at the various ways in which these bands have been institutionalised since the late twentieth century. Recognising the need for these bands to have well-defined performance domains in order to survive, she argues that ‘the same versatility that has allowed brass bands to adapt to a wide range of contexts across the globe can also be noted in the ways in which they have adapted to changing circumstances within a single geographic setting” (101). The tension between tradition and change is most acutely described in Matt Sakakeeny’s fascinating and ethnographically rich study of the New Orleans brass band tradition, taking into account the “Brass Band Renaissance” that began in the late 1960s, its modernisation (also popularisation) from the 1990s, and a newer impulse to traditionalise. For Sakakeeny, the tension between traditional values and popular culture are at stake in a genre that is simultaneously extremely adaptable and hotly contested in terms that centre around the “burden of representation” (125) of the African-American community. He describes in particular the activities of one ensemble, the Black Men of Labor, articulating the ways that they negotiate the sustainability (and respectability) of tradition with more recent and popular stylistic developments.

The next three chapters move away form this thematic area to a certain extent and shift the focus more squarely onto that of community. Sylvia Bruinders examines Christmas Bands in the Western Cape region of South Africa, and considers the ways in which the displaced Creole population of used brass band performance to take back the public space of Cape Town through performances that underscore respectability. Exploring both road marches and competitions, she understands these practices as particularly significant for politically marginalised communities that stand in an ambiguous relationship to the nation. Katherine Brucher’s case study of the Sociedade Filarmónica de Covões, a brass band organisation representative of many of its kind in rural central and northern Portugal, focuses less on the politics of community and more on the process of community through banding. Making and important assertion about this process, she argues that “the acquisition of musical skills cannot be separated from how a musician acquires social knowledge though the relationships between him or herself and the people he or she encounter” (175). Gordon Ramsey’s chapter on the Northern Irish Protestant fife and drum tradition merges the political with the social through ethnographic description. Isolating a local band’s yearly journey to Scotland, he examines the group’s journey as pilgrimage in Turnerian terms – suggesting that the liminality of the event encourages a musical communitas that is “politically effective at a level deeper than discourse” (196). The concept of “embodied politics” that he proposes is a useful way of thinking about how banding facilitates participation in precisely the ways that Keil deems most significant. The fact that these politics are, in Ireland, also associated with sectarian violence is a complication that potentially merits further discussion.

Helena Simonett’s final chapter, which concisely details the development of the Mexican banda tradition, brings the volume to a close by flipping traditional narratives of brass bands as localised. She examines in particular the relationship between local Sinaloan bands and their popular counterparts as they emerged over the course of the twentieth century, culminating in the advent of technobanda as a transnational music especially popular among Mexican immigrants in the United States. In so doing, she considers what happens when a localised brass band tradition becomes globalised, and the ways in which musicians deal with the desire to stay true to their roots and to appeal to a larger market. Once again, the tensions between constancy and adaptability are highlighted.

This book contributes to a growing body of research into band traditions and cultures. One might see it as the global and ethnomusicological counterpart to The British Brass Band: A Musical a Social History, edited by Trevor Herbert (2000). Two important monographs on global brass band traditions also bear mentioning. Helena Simonett’s Banda: Mexican Musical Life Across Borders (2001) constitutes a significant study of the development of Sinaloan brass bands, particularly as they emerged in the realm of popular music in the twentieth century. Gregory D. Booth’s Brass Baja (2006) provided remarkable insight into the ubiquitous yet often overlooked subject of Indian wedding bands. Perhaps the book that most closely corresponds to this volume is Rob Boonajer Flaes’s Brass Unbound: Secret Children of the Colonial Brass Band, which presents case studies of a number of brass band cultures throughout the world. Flaes’s text has a singular focus on localising processes in postcolonial contexts. Reily and Brucher’s volume, on the other hand, intentionally avoids large-scale theorisation in favour of presenting a diversity of methodological and theoretical approaches to the subject. As a whole, this book makes a strong case for the richness of this subject area, and also for the continued relevance and usefulness of comparative work in ethnomusicology.